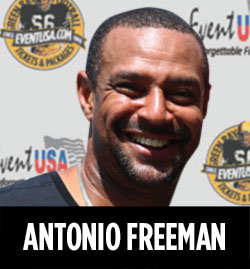 He played college football at Virginia Tech, where he caught 93 passes for 1,534 yards and 16 touchdowns in three seasons. He also returned 63 punts for 651 yards and another touchdown, and rushed for 37 yards. His accomplishments earned him enshrinement in the Virginia Tech Sports Hall of Fame.

Freeman was drafted by the Green Bay Packers in the 1995 NFL Draft. In his rookie season, he returned a punt 76 yards for a touchdown during a playoff win over Atlanta. He went on to lead the Packers in receiving in four seasons from 1996–1999, and led the NFL in receiving in 1998.

Arguably the peak of Freeman’s career occurred during the 1996 season, and in a victory in Super Bowl XXI over the Patriots. During that Super Bowl, Freeman caught a then Super Bowl record-longest touchdown pass of 81 yards from Brett Favre. That play would give the Packers the lead for good as they went on to win 35–21. Freeman finished the game with 105 yards.

The following year, Freeman gained over 1,200 receiving yards as Green Bay advanced to their second consecutive Super Bowl, where he caught 9 passes for 126 yards and 2 touchdowns. His 230 all-purpose yards in that game was the third highest total in Super Bowl history.

In 1998, Freeman had his best NFL season, catching 84 passes for a league leading 1,424 receiving yards and earning the right to a Pro Bowl appearance.

One of the more memorable plays of his career occurred during overtime of a Monday night game on November 6, 2000 when, despite bad weather conditions, Freeman caught what initially appeared to be an incomplete pass while lying on his back, but the ball actually bounced off multiple parts of his body without hitting the ground. Untouched by the defender, Freeman jumped to his feet and ran the ball in for the winning touchdown over the Vikings. The touchdown prompted ABC play-by-play announcer Al Michaels to famously shout, “He did WHAT?!” In 2005, ESPN labeled the catch as the greatest play in the history of Monday Night Football.

Freeman has said it was the second best catch of his career (claiming his best to be the 81-yard touchdown reception in Super Bowl XXXI).

His final catch with the Packers occurred on the road in December 2003 during the fourth quarter of Brett Favre’s phenomenal performance against the Oakland Raiders on ABC’s Monday Night Football, following the death of Favre’s father.

In his ten NFL seasons, Freeman caught 477 passes for 7,251 yards, gained 1,007 yards returning kickoffs and punts, and scored 61 touchdowns. His teams made the playoffs in seven of his NFL seasons. He appeared in four NFC Championship Games and two Super Bowls. As of 2018, he ranks sixth all-time on the Green Bay Packers receivers list with 6,651 yards on 431 catches.

Antonio occasionally participates as an analyst on ESPN First Take and NFL Live, mostly during the NFL season. He has also appeared on ESPN College Gameday. He has hosted his own radio show ‘The End Zone with Antonio Freeman’ since 2010. The show currently airs on WTSO in Madison and WOKY in Milwaukee, Wisconsin.

Most notably, he hosts the Event USA pre-game tailgate party for Packers home games and has appeared at several Event USA road tailgate parties and other Event USA special events.