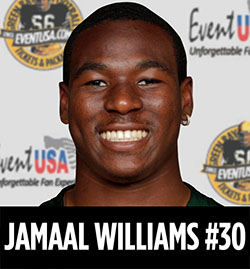 Jamaal Malik Williams (born April 3, 1995) is a running back for the Green Bay Packers.

He attended and played football at Summit High School in Fontana, California and, after a stand-out career there, went on to play college football at BYU.

A knee injury curtailed his Junior campaign, and he was also out the 2015 season, but returned for his senior year season, amassing 1,375 yards on 234 carries and 12 touchdowns, leading the independent conference in all three categories. Overall, during his college career, he rushed for a school-record 3,901 yards on 726 carries with 35 touchdowns.

Williams was drafted by the Packers in the fourth round with the 134th overall pick in the 2017 NFL Draft. On September 10, 2017, in his NFL debut, Williams had two rushes for nine yards in a 17–9 victory over the Seahawks. In Week 9, against the Lions, he scored his first career rushing touchdown and on December 3, against Tampa Bay, he had 113 rushing yards and a rushing touchdown. Overall, he finished his rookie season with 556 rushing yards, four rushing touchdowns, 25 receptions, 262 receiving yards, and two receiving touchdowns. That rushing total was the team-season high and the fourth most by a Green Bay rookie in team history.

His 153 carries were the third most in franchise history by a rookie behind only RBs Eddie Lacy and John Brockington. His receiving yards were the most by a Green Bay rookie running back since Keith Woodside totaled 352 yards in 1988 and he became the first rookie in team history to register a rushing TD/receiving TD in two games (Week 12 at Pittsburgh, Week 14 at Cleveland). He registered 100-plus yards from scrimmage in four of the final six games.

The 2019 season promises to be another good one for Williams with the Packers new emphasis on the running attack under Coach Matt LaFleur.