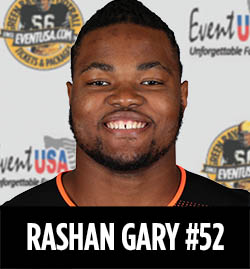 Rashan Abdul Gary (born December 3, 1997) is a outside linebacker for the Green Bay Packers.  In 2015, he concluded his high school football career, at Paramus Catholic High School in New Jersey, ranked as the No. 1 recruit in college football’s incoming Class of 2016.

He continued his football career at the University of Michigan and, asa freshman, Gary played in all thirteen games. He was named to the Pro Football Focus College Big Ten Defensive Team of the Week following his performance against UCF on September 10, 2016, in which he had 6 tackles and 2 tackles for loss, including 1 sack.

Prior to the 2018 season, Gary was named an AP second-team preseason All-American. Gary recorded 38 total tackles during the 2018 season, including 6.5 tackles for a loss, and 3.5 sacks. Was named to the watch lists for the Walter Camp Player of the Year, Bronko Nagurski Trophy, Chuck Bednarik Award and Ted Hendricks Award in 2018.

During the 2018 with the Wolverines, Gary started all nine games he appeared in at DE, finishing with 44 tackles (18 solo), 3½ sacks, seven tackles for a loss and five QB hits. He earned first-team All-Big Ten honors and helped the Wolverines rank No. 2 in the country in total defense (275.2 ypg) and passing defense (147.8 ypg) and No. 16 in scoring defense (19.4 ppg).

Beginning his NFL career in the 2019 season, Gary is 100% healthy and looks forward adding his defensive pass-rushing acumen to the team’s defensive unit for many years to come.