The Green Bay Packer’s have announced that they will not permit any fans to attend the first two home games this season, due to Covid 19 concerns. The first home game where fans might be permitted to attend would be on November 1, 2020, against the Minnesota Vikings. They’ve also announced that should they decide to permit fans to attend after the first two games, the quantities of tickets issued will be significantly reduced. Similar events are unfolding throughout the NFL and the world of sports. Therefore, we have suspended sales of all of our Packers and others NFL game tickets and packages until we know what inventory we will have to offer. Please check back as we hope to know soon. For those of you who have placed orders, we will be in touch with you soon regarding how this affects your order and what options we will have for you. 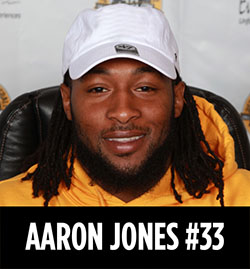 Aaron LaRae Jones (born December 2, 1994) is a running back for the Green Bay Packers.  He played college football at the University of Texas at El Paso from 2013–2016.

In his collegiate freshman debut, against New Mexico, he had 11 carries for 127 yards and two rushing touchdowns and later, against Rice, he had a season-high 186 rushing yards.

As a junior, Aaron played in only two games, his season cut short by an ankle injury.  But, as a senior, he bounced back with a huge season, playing in all 12 games. In his first game back from the ankle injury, he had 249 rushing yards and two rushing touchdowns in a win over New Mexico State.  In other games that year he racked up big rushing totals, including performances of 228 yards, 229 yards, and 301 yards. Overall, he finished his final collegiate season with 1,773 rushing yards, 17 rushing touchdowns, 28 receptions, 233 receiving yards, three receiving touchdowns, and one passing touchdown. Jones was one of the most prolific players in UTEP Miner’s history, establishing numerous individual records that still stand.

During the 2018 NFL season, Aaron continued to develop into a dominant running back for the Packers including finishing the year with the highest average yards per attempt in the entire league.  Injuries cut his season short but he still finished the 2018 season with 728 rushing yards, 8 rushing touchdowns, 26 receptions, 206 receiving yards, and one receiving touchdown.

Back for the 2019 season, healthy and in the best playing shape of his career, Aaron looks forward to the Packers new emphasis on the rushing attack and playing a huge part in the offensive scheme.

"I attended the KC road game. As usual, the experience with EUSA was great. I have been dealing with your organization since 2007 and have always been extremely satisfied, and have been a yearly client! Keep up the good work and see you next year! "
-Jean-Pierre
"Thanks to Events USA for their help making this trip with my sons something we will never forget. Everything about our package deal exceeded our expectations and can't wait to hopefully return in the near future with my Grandchildren. Lambeau Field truly is a Special place. Thanks Again Packer family for life from New Jersey."
-Geoffrey Kline, New Jersey
"It was a magnificent experience for us as Packer Backers from Hamburg, Germany. Thanks for the very good service. Once I said that I want to watch one Packers game in my life live at Lambeau. Today, I would like to do it again once in my life. And the Bus driver was great!!! Go Pack go!!!"
-Michael Denker, Germany
"I can’t express what a great time I had in Titletown. Ever since I started watching the Packers 15 years ago as a ten year old, I’ve wanted to go see a game at Lambeau Field. I located your website by accident, and I was too excited for words. Finally there was a way to go see the Packers at Lambeau. I can only say that the weekend exceeded my expectations. The service was fantastic, the staff was very helpful and the tailgate party was first rate. More importantly, the staff made sure I had a good time even though I was at the game alone. I can’t stop recommending Event USA to all my fellow Packer Backers around Toronto."
-Scott Mitchell, Toronto
"I’m one of the two New York City police officers who couldn’t make the Sept 2001 Monday Night game with the Redskins, due to the events of 9/11. I wanted to thank you for your understanding and compassion, in letting us reschedule the game for the season opener on Sept 8th 2002. Your staff was exceptional and professional in all areas and I’m sure you’re extremely proud of them and their efforts. I’ve been a Packer fan for 40 years, so it meant so much to actually see the Packers at Lambeau Field. Needless to say, my expectations were exceeded on Sept 8th. I’m proud to be associated with the greatest team, town, and fans in the world."
-Ken Frazer, White Plains
"I can’t say enough positive things about doing business with you all.  The customer service was top notch and the ease of going through you all was amazing. The seats we were assigned were impeccable. Best seats I’ve ever had. The tailgating party is the way to go. Thanks for helping make more cherished memories from Lambeau. Go Pack go!!!"
-Tara Palmer
"On behalf of the LSU Alumni Association and LSU Tiger Nation, thank you for helping us make the LSU Traveling Tigers trip to Green Bay and Lambeau Field a huge success. We have received many compliments from travelers, all were greatly satisfied with their experience. We happily pass those kudos on to you! The 1,200-person, four-day trip was the culmination of two years of planning, and we could not have done it without your expert help and advice. Organizing the transportation, housing, and feeding our travelers was a challenge, and the detailed, thorough planning involved was handled with enthusiasm and professionalism. Each and every one of the venues and services provided was top-notch. Again, thank you for making it all possible. We would welcome the opportunity to work with you again in the future."
-Amanda Robichaux, LSU Alumni Association
"Love Event USA and they are the friendliest staff you will ever meet. We're always satisfied with our tickets and everything goes smoothly every time. Thanks again!"
-Brandon Schulz
"Purchased Packers tickets. Buying experience was great, location is very close to Lambeau and pick up was quick. Will definitely use this company again for Packers tickets."
-Matthew Gotelaere
"Just wanted to say thank you to everyone for the wonderful service they provided. We came from Canada and bought tickets for the Dec 30th game. The staff was great from the moment I called and ordered the tickets to the day we picked them up. Thanks again for making our trip a huge success!"
-Zoe Heeney, Canada
"Just came back from your Lodge Kohler package for the Bengals game. Everything was terrific, a room facing the stadium, tickets in the third row. We book with you every year and that will continue. Thanks for all your hard work to make sure we had a great time. Excellent Job and many thanks!"
-Tom & Laura, Massachusetts