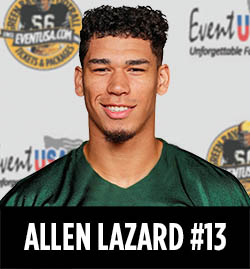 Allen Lazard (born December 11, 1995) is a wide receiver for the Green Bay Packers. He played college football at Iowa State and was signed by the Packers as an undrafted free agent in 2019.

Lazard was a top-rated recruit coming out of high school, a consensus Four Star prospect and was named a 2013 USA Today High School All-American.

He was ranked the No. 1 recruit of the state of Iowa and the 7th best receiver in the country by Rivals.

During his college career, he was selected to the First-team All-Big 12 in both 2016 and 2017 and is Iowa State’s career leader in both receptions and receiving yards.  In 2015, he started 11 of the Cyclones 12 games. He finished second on the team in receptions (45) and receiving yards (593) as well as scoring three touchdowns. Both reception and receiving totals rank second all-time for an ISU freshman. The first catch of his career went for 48 yards against North Dakota State and he caught his first career touchdown pass against Kansas State the next week. His season high was 96 yards and a touchdown against the Toledo Rockets.

At the conclusion of the season, Lazard was named to the All-Big 12 honorable mention team and earned ESPN.com Big 12 All-Underclassman honors.

Lazard built on the success from his freshman season by starting all 11 games the next season and lead the team in receptions (56), receiving yards (808) and TD catches (6). His season highs included a then career-high 147 yards receiving and a career-long 74-yard touchdown against TCU  and a pair of touchdowns on five catches for 87 yards against Kansas State. Lazard was named Second-Team All-Big 12 by the AP and ESPN’s Big 12 All-Underclassman team for second-straight season as well receiving the Pete Taylor Most Valuable Player.

Then came Lazard’s breakout season, one of the greatest single seasons in Cyclone history. He once again lead the team in receptions (69), receiving yards (1,018) and TD catches (7) as well as breaking the school record for 100-yard receiving games with six and becoming the fourth player in school history to record a 1,000-yard season. Lazard was named First-Team All-Big 12 by the Coaches and ESPN and as the Pete Taylor Most Valuable Player for the second straight year.

Lazard signed with the Jacksonville Jaguars as an undrafted free agent on April 30, 2018 and was ultimately signed to the practice squad.  On December 18, 2018, Lazard was signed by the Green Bay Packers off the Jaguars practice squad. He was promoted to the active roster on September 4, 2019.  Lazard quickly earning Aaron Rodgers’ trust in Week 6 and caught his first professional touchdown, a 35-yard reception, during the win over the Detroit Lions on October 14, 2019. Thereafter, he continued to blossom and played a significant role, especially in the absence of injured star receiver, Davante Adams.

Lazard is a tall and speedy wide receiver, who continues to show great promise as a dominant offensive weapon in the NFL.