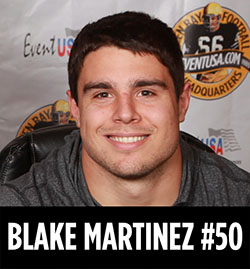 Blake Martinez (born January 9, 1994) is an inside linebacker for the Packers. He attended high school in Oro Valley, Arizona before continuing his football career at Stanford on a scholarship. At Stanford, he was a two-year starter at linebacker for the Cardinal, where he was named to the first-team All-Pac-12 team in 2015.

Martinez had a breakout season his junior year at Stanford where he started 13 games. In three of those games, he had over ten tackles. In arguably his best game of the season, he intercepted back-to-back passes that had been thrown by quarterback Jared Goff, the first overall draft pick in the 2016 NFL Draft. That ended Goff’s school record for most consecutive attempts without an interception. Blake finished the year with a team-leading 102 tackles.

In his final season with the Cardinal, Martinez played in 14 games and finished with a team-high 141 tackles (75 solo), 1.5 sacks, and six pass breakups. His efforts earned him being named to the All-Pac-12 first team.

Martinez was drafted by the Packers in the fourth round of the 2016 NFL Draft and saw extensive play as a rookie, staring nine games.

For the 2019 season, Blake is projected to continue his dominant linebacking performance under Defensive Coordinator Mike Pettine.