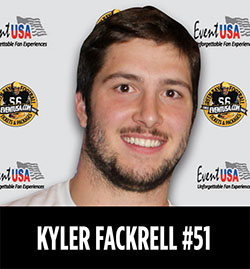 Kyler Fackrell (born November 25, 1991) is an outside linebacker for the Green Bay Packers. He played high school football in Mesa, Arizona, as a quarterback, wide receiver and linebacker, before attending Utah State where he was a four-year starter at linebacker and was named to multiple All-Conference teams.

After taking a year off and then being red-shirted, in his first year of college eligibility, he started all 13 games for the Aggies and finished the year as the first player in the school’s history to be named a Freshman All-American and the fourth to win All-Conference First Team honors.

As a sophomore, he continued to impress as he again started all 14 games and led the team with 13 tackles for loss and also had two forced fumbles and five sacks. During a game against Hawaii, he intercepted a pass and returned it 99 yards for a touchdown. And during a game later that year he caught a touchdown pass and became the first person since 1964 in Utah State’s history to have an offensive and defensive touchdown in the same season.

Fackrell’s junior season was cut short as he suffered an ACL injury in the season opener, missing the rest of the year.

Coming back from the injury the next season, Fackrell started all 13 games and ranked first in the country with five fumble recoveries. On top of that, he also ranked first on the team with 15 tackles for loss and broke the school-record for 12 quarterback hurries. He was named the Mountain West Conference Player of the Week two times that season. He finished his last year with the Aggies by being named a First Team Conference selection.

He was drafted after his senior year of college by the Packers in 2016 in round three of the NFL Draft.

Fackrell was used sparingly in his first two NFL seasons. On September 25, 2016, Fackrell registered his first career sack on Lions quarterback Mathew Stafford in a 34–27 Packers win. On September 10, 2017, in the season opener against the Seahawks, Fackrell recovered a Russell Wilson fumble, helping to seal a 17–9 win.

In 2018, Fackrell’s NFL career blossomed under new Packers’ Defensive Coordinator Mike Pettine’s leadership. On September 30, 2018, he registered a career-high three sacks in the fourth quarter against the Buffalo Bills in a 22–0 win. And he had yet another three-sack performance on November 15 at Seattle, tallying an additional four tackles for loss and four hits on Seahawks quarterback Russell Wilson. Fackrell finished the breakout year with a team-leading 10.5 sack

After an excellent off-season of workouts, Kyler is considered to be an integral cog in the Packers’ rejuvenated defensive scheme for 2019 under new head coach Matt LaFleur.