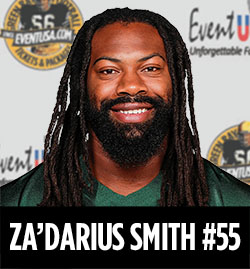 In Week 6 of the 2018 season, Smith recorded three sacks, which was part of the new team record 11 sacks, in a 21–0 win over the Tennessee Titans, earning him AFC Defensive Player of the Week. He finished the season with career-highs with 45 combined tackles, 8.5 sacks, two passes defensed and a forced fumble. He led the Ravens in sacks and finished sixth on the team in tackles.

On March 14, 2019, Smith signed a four-year, contract with the Green Bay Packers. In Smith’s debut as a Packer in week 1, he made 3 tackles and sacked Mitchell Trubisky once in the 10-3 win over the Chicago Bears. In week 6 against the Detroit Lions, Smith recorded a sack on Matthew Stafford in the 23-22 win.

As the 2019 season progressed, Za’Darius teamed with fellow free-agent signee, Preston Smith, to embark upon a record pace for sacking the quarterback through the early part of the season. With Za’Darius on the team, the Packers’ defense overall improved dramatically and the team is looking forward to many more extremely productive seasons with him as an integral part of that defense.